Skip to content Skip to right sidebar Skip to footer

It is with great sadness that we report the passing of one of the Centre’s founding members.

Just a few months ago, Margaret had still been helping out at the Centre.
We shall all miss her very much indeed.

Margaret’s funeral will be held on Wednesday, 20th November, 2 pm at St Laurence’s Church in Wichenford.

OUR Worcester Legends series profiles ‘ordinary people’ who make our city such a great place to live due to their passion, dedication and kindness.

We’re telling their stories every Tuesday in the newspaper and on our website.

91-YEAR-OLD Margaret Johnson has spent the last 40 years helping to run The Nora Parsons Centre in Wichenford – a meeting place for the elderly – having helped raise the funds to set it up in 1977.

Nominated by fellow volunteer Barbara Kirby, Mrs Johnson, who lives in nearby Worcester, works tirelessly running coffee mornings, as well as organising transport, serving lunches and even calls out the bingo.

Nora Parsons, a retired district nurse, realised there were many older people in her area who spent much of their time alone, and decided to start the centre.

Good friend Mrs Johnson came on board immediately, and with the help of Canon Bartlett, then the Vicar of Wichenford, the centre was established, first in the village hall, now on Venn Lane.

Following Ms Parsons’ death, Mrs Johnson has continued to keep the centre running smoothly, as well as bringing up four children, before helping to raise 11 grandchildren and 14 great-grandchildren.

She is also involved in the Martley WI branch and Guide Dogs for the Blind, the Worcester Goat Society and an over 65s coffee club, while also continuing to play skittles for a pub team.

Having been a volunteer in the Land Army during the Second World War, Mrs Johnson, born in Burton-on-Trent, met and married her husband George Johnson, a herdsman, in 1948.

The couple moved to various farms across The Midlands – both taking up work – including at Cob House Farm and that of Colonel Marsh of Marsh and Baxter, the pie and sausage makers.

In the 1950s, with their two oldest children Ken and Sue, Mr and Mrs Johnson boarded an ocean liner to start a new life in Canada, but after 13 months returned to their roots.

Mrs Kirby, having been involved in the centre for two years, described her fellow volunteer as “brilliant” and a “true inspiration”.

To read the original article click on the following link: Worcester Legends.

There are no upcoming events.

Celebrating the 40th anniversary of the Nora Parsons Centre with a wonderful tea party and Margaret as a founder member, cutting the cake. 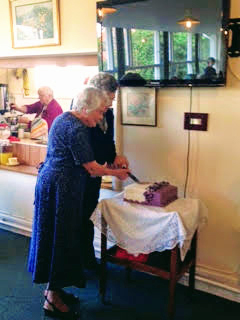